We all know him. The unreconstructed supporter who, as far as their county is concerned, hears no evil, sees no evil and, depending on how things are going for the team speaks no evil. When he does speak he can be worth the listening. Oh yes he can! 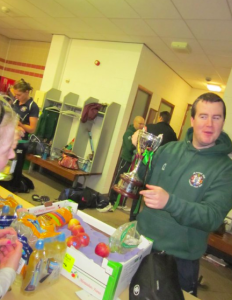 There are the men that loyal to the colours. Faithful to the cause to a fault. McKenna Cup matches? Not a bother. The odd friendly in the backend of beyond? Not out of the question. Talking endless football in a corner bar? Frequently. Sticking up for players? Yes indeed, many would be close friends.

Let us give him a name. Let’s call him Conan. It’s a common enough name. For the sake of argument let us say that he is from one of Derry’s less fashionable clubs.  And let’s imagine that Conan goes to matches with his father, whom he refers to as ‘me da.’

I’ve never met his ‘da’ but I know the sort of him. His son didn’t lick it off the grass you know. He too, an unreconstructed Derry man. Goes to the All Ireland Final every year, him and his son both. Together. Not to support Derry of course. That vintage isn’t often tasted by the corner bar regulars. But like a dog watching the master eat his dinner, the annual Croker trip only whets the appetite for the day when he too can once again feast at the top table.

And what of his loyalty and friendship? Here is a man who may travel round the world exploring new things, bungee jumping, walking the Sydney Harbour Bridge, speeding in the outback, savouring the delights of Bangkok, the street markets of Bolivia. Tucked in the rucksack will be the club shirt, the county jersey and an iPod packed to the hilt with songs and music to ease his lonely heart.

But he wasn’t really lonely. Alongside him there through thick and thin were maybe a few other lads, chancers, eejits and the odd footballer or two who wanted to travel the world and see what goes on in places that aren’t Derry.

One boy, not Conan, buying a pair of self-cleaning underpants from an outdoor clothing store before he left. Maybe suitable for outdoor wear but indoors in the travellers’ tent not such a welcome article.

Our man Conan organised much of the trip. Whilst others were tattooed, shaved and massaged, and tried to impress the local ladies with the lines that maybe worked in Dorman’s and Walshes’, he made sure in the next town they had somewhere to stay.

And when the Club dinner dance came along it was him that got them all together and sang ‘Back Home in Derry’ on video and squirelled it home for the folks. Because back home in Derry, Christmas mightn’t be just the same without them.

Eventually though our man Conan, isn’t that what we called him? He comes home and settled back down to doing what he does. Maybe the jobs are harder to find. Still. Maybe be gets the chance to help out with a team or two. Even working with a couple of the County underage teams and maybe a club team or two.

And although much in demand he maybe gets a day out in Croke Park himself with a camogie team in the All Ireland. And best of all, would you believe it, they won and who ever heard of the team physio being quoted afterwards in the Irish News!  Some people are born to it.

Maybe one day he’ll immortalise it all in a poem or two. But one thing’s for certain, he’s here today!