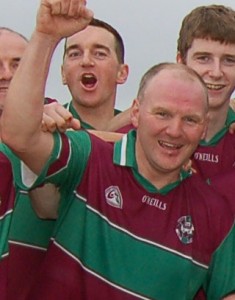 The Old School Hurler. Age never wearies him, he hurls every day as if it's his last.

This article first appeared in the All Ireland Hurling Final programme.

The tale of the Returning Old School Hurler, like the story of the man who’d been abducted by aliens only to come back to earth, is a tale worth telling.

In a club far away from the heartland of the Déise and the Cats lives our man. A Legend perhaps. The Returning Old School Hurler may have emigrated, succumbed to a fragrant or, more likely, nagging wife, or over-depended on the drink. Now he’s returned, pressed backed into service, reluctantly, with a gnawing in the pit of his now-larger-gut.

Our man, as someone that could ‘hurl a bit’ is asked to put his shoulder to the wheel one last time, to help a posse of precocious young Turks find their own feet at senior level. His role? To pull hard, early and often; to show example; to demonstrate his guile and to dispense restorative justice to liberty-takers, if required of course. The latter achieved with as much subtlety and aplomb as the deft flicks by which he lifts and clears the ball from a melee of players on the edge of his own square.

In his day Lucozade was something brought to hospital; on a coul day a t-shirt worn under your jersey – not one of these skintight affairs that looked like something guys would wear to a nightclub called the Pink Paradiso. The balls too seemed lighter these days – in the mists of time poccing a water-logged sliotar over the bar late on to seal victory was a valuable life-skill, requiring wrists of iron and the swing of Thor to heft the hurley. And what of the hurley itself?

He returns to his mother’s garage to retrieve his sticks – linseed oiled and sprung, long, and elegant, with narrow grips of bare ash, sweeping down in curves sweetly-grained to a supremely crafted bas with honed blade. When he pulled them from his bag, the dressing room fell to silence, staring in wonder – bananas temporarily unchewed and Energise undrank. Our man pondering the unexpected interest, but saying nothing – as usual. Short shorts, too tight for comfort, a badge-faded battle-worn jersey – barely legible: County Final 1989.

On the field he raised a greying eyebrow – the young Turks’ hurls like malnourished saplings beside his own – colourfully gripped but armlength short it seemed to him. Not for the Returning Old School Hurler – his hands dipped in rosin, sliotar seized from the air with the speed of a cobra strike. The 37″ hurley? He could hook a man across the road twas that long, but could he wield it? Oh yes. In style. With panache. In any situation.

Gradually the younger players knew – they were in the presence of a higher being. When he trained, they watched. When he played, they played. And when he finally spoke, they listened.

Old School. Twas as if he’d never been away you know.