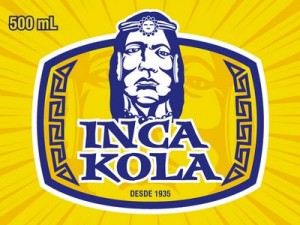 Inca Kola is to Peru what Irn Bru is Scotland and Football Special is to Donegal. If you’ve never been to Donegal then ignore the last reference. If you haven’t been to Peru, well you dunno what you’re missing.

After getting married, Angela and myself went there. It was to be the trip of a lifetime and it didn’t disappoint. I was delighted a few years later when my brother decided to get married in Peru, which meant I had to go back.

Unfortunately Angela was expecting our son Leo and couldn’t join me. It gave me the chance to experince the wonders of Peru more as a local that a tourist. My sister-in-law Andrea’s family redefined forever my understanding of the words hospitality and family. As the song says, ‘I’ll n’er forget their kindness’. But more about those trips another time.

The one thing that never changed was the presence of Inca Kola. Everywhere. You may think that in a so called lesser developed country advertising would perhaps be less common or in someway less sophisticated than it is here. Not so and certainly not so as far as Inca Kola was concerned.

The drink itself is a bright yellow colour, sickly sweet and fizzy. It is the Peruvians claim, an acquired taste. It is also for them a statement of their national pride. For although Coca Cola is highly visible in Peru, it is Inca Kola that is the preferred drink amongst the locals. In some way, drinking anything else is deemed to be unpatriotic!

The drink is made from Lemon Verbena and was creatad in 1935 by an English immigrant. It was marketed under various slogans:

‘It’s ours! The drink of Peru’

I’m not sure that Manco Capac or any of the original Incas drank anything resembling Inca Kola but it is as authentic Puruviana as the local weaving and  pottery, Macchu Picchu, the Nazca Lines, Lake Titicaca or the famous walls in Cuzco.

If you’re ever there try some roasted guinea pig washed down with a glass of the yellow stuff! You’ll need a pisco sour to recover!