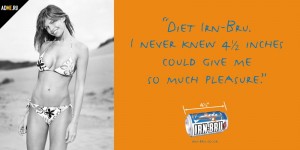 I spent ten months in Stirling in Scotland doing a Masters degree after I finished at Queen’s in Belfast. Among the many positives from the course was an introduction to Irn Bru. It wasn’t on the course syllabus I should add, more on the morning after agenda.

I had of course heard of, and tasted the stickly sweet drink before going to Scotland, but I couldn’t believe how common it was. In every shop there were racks of Barr’s Irn Bru – the distinctive orange and blue was everywhere. It wasn’t til’ I was there that I actually began to like the stuff. Going native or what!

The pubs sold it in the way bars here have Club Orange. And on a Sunday morning everyone who was hungover seemed to have a large bottle of it tucked into their coat pocket. Obviously a can wasn’t enough to offset the ravages of a night on the 80 Shilling, single malt or whatever the poison was.

I found myself that it was a surprisingly good drink for these purposes.  Think tongue painted with liquid sugar, and you’ll get the idea.

Irn Bru was initially a Scots only drink – although sold elsewhere it had a rock solid home market and it played up to the market with its famous ‘Made Frae Girders’ tagline. That appealed to the Rab C Nesbitts of the home market, all string vest,  mouthful of haggis accent and twinkle in the eye for unsuspecting tourists.

As its agency Leith put it, ‘For Scots of all ages, it is a reminder of their childhood; for those abroad, it is the taste of home.’

In the early Nineties the market share came under increasing threat from Coke and Pepsi causing Irn Bru to move beyong their traditional territory. 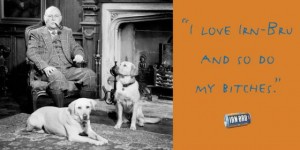 But first they did what all businesses should do before expanding and hitting a new market. They did a lot of market research on the ground with a key target audience. Young people. They found that the ‘Made in Scotland, From Girders’ didn’t translate across into the rest of Britain.

What they did find was a great enthusiasm for the brand, but no two people thought about Irn Bru the same way. They came up with the term ‘likeable maverick’ to describe it and set about building a brand image that appealed to young people in a fun way.

Some of the subsequent advertising would make you laugh out lout. Plenty to talk about in the pub. And the next day, head pounding as if you’re being nailed with a rivet gun on the Govan Shipyard? Nothing like an Irn Bru to get you back on the straight and narrow. Made Frae Girders indeed.