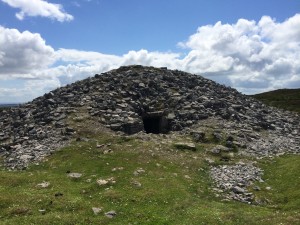 Across the Bricklieve (Breac Sliabh) range of mountains in South Sligo are a network of passage tombs at Carrowkeel.

Perched remotely on top of the hillside on the west side of Lough Arrow, I’d heard of the graves but had never been in the immediate vicinity to go and explore. Recently we had the opportunity.

This is Tuatha Dé Danann country, part of Moytura where they fought the Fomorians according to the Book of Invasions. The passage graves at Carrowkeel are thought to predate the Pyramids in Egypt by five hundred years or so.

Having decided to visit the graves, we ascended through increasingly bucolic roads that narrowed with a narrow landing strip of green grass along the middle. My brother John led the way in his hired car. Eventually we came to a gate at which we had to halt to open to proceed onwards.

It is part of our family mythology that years ago on a family holiday in Waterford, when we were all much younger, John as the navigator led us all the way up into the Nyre Valley, getting out and opening gate after gate along the way as we moved farther from civilisation. My dad had relied on John’s map reading skills as he was a keen geography student and a budding geologist of note. Eventually frustrated the oul fella said: ‘John where are we?’ to which he received the reply, ‘I don’t know.’

The journey up into the hills of Bricklieve brought a smile to my face and I reminded him of this as we dismounted to open the gate into rougher territory.

We moved as far as we felt was prudent with cars and then set about walking the remaining mile or so up the winding road to the Passage Graves. The area was elevated, rough enough terrain and totally deserted bar a few sheep and the occasional American tourist. We met a walking group as we descended, one of their party clambering downwards in a fugue of cigarette smoke. It was incongruous in the peaceful and clear hill air.

From a distance the stone cairns are visible and as you draw closer they appear as mounds of limestone spaced apart on the hilltop. Upon approaching you can see that there are openings in each grave, apart from one where the roof has collapsed. We learned later that this was due to dynamiting by early explorers.

As we approached the graves, the boys crawled on hands and knees into the passages, you would need to be of slight build and have no qualms of claustrophobia to venture in. They reported back on the small chamber opening out into chambers either side. It was a strange experience knowing these were the burial places for young children thousands of years ago.

The graves were first explored and to an extent damaged by R.A.S. Macalister in 1911, accompanied by Robert Lloyd Praeger and Edmund Clarence Richard Armstrong. Writing many years later Praeger gave an account of what greeted him when he and his colleagues hastily rolled back the enormous grave capstone.

“I lit three candles and stood awhile, to let my eyes accustom themselves to the dim light. There was everything, just as the last Bronze Age man (sic) had left it, three to four thousand years before. A light brownish dust covered all… There beads of stone, bone implements made from Red Deer antlers, and many fragments of much decayed pottery. On little raised recesses in the wall were flat stones, on which reposed the calcinated bones of young children.”

Apparently, it was Macalister and Praeger that destroyed the collapsed grave by trying to blow it open.

When I was young my history teacher Cormac McAleer at the Brothers in Omagh had taught us about passage graves, though the only one I had seen to date was Newgrange. In many ways Carrowkeel were more interesting and were closer to what I remember Cormac explaining all those years ago of their structure and purpose.

If you’re in the vicinity of South Sligo, Carrowkeel is well worth the time to pay a visit, stepping back in time as you ascend the speckled mountainside on foot. It is a wonderfully peaceful location with views across Sligo to Knocknarea to the west and an incredible vista to the south and east. More the pity that people don’t take the time to know and understand their own country around them. You would be surprised at what you might learn.