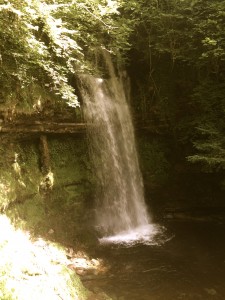 Where dips the rocky highland/ Of Sleuth Wood in the lake

Where the wandering water gushes
From the hills above Glen-Car

The road home from Sligo was marked with a detour to the Glencar waterfall. In recent times I had done a lot of work for IT Sligo using Yeats poetry as an influence. Many of the places mentioned in his work are like familiar parts of my own work landscape to the extent that a few people wrongly believe I am a Yeats expert. Nothing could be farther from the truth.

Travelling back from our stay near Lake Arrow, we turned right for Glencar Waterfall, the lake to the right, the towering cataract to our left, all the while surrounded by the most lush greenery you can see.

With IT Sligo we talked of the influences on their identify system of the blue grey of the mountain, the green of the landscape and the blue of the water. Nowhere is it better on view.

Having arrived at the lake, a large sign informed us that the local council had banned dogs from the waterfall and environs. Fair enough but there is nothing else much to do with a bounding one year old labrador, so I took one for the team and agreed to stay behind whilst the rest including my mother walked up the short distance to the famous scene.

As I moseyed about dog on lead I encountered a Polish lad bringing canoes and kayaks to the water’s edge of the lake. When the gang returned my mother who was feeling her age told me to go up and see the waterfall. She had walked up herself and said on her return “I was glad I did that.”

I too was glad I did. The sheet of water tumbled into the stream below before washing down into the Lake. It’s easy to see why William Butler Yeats was enchanted by the place. The vapour in the air hung on the ferns, the cliff overhung with greenery and the pools of dark and shade through the emerald enchanting. It’s no wonder Yeats thought of faeries and mystics in such a magical place.

I took my leave and walked back to the more sedate water’s edge of the lake where the little waves lapped on the shore. The children were a few hundred metres away having decided to take up the Polish lads offer of half an hour’s kayaking.

It was an altogether magical detour to the waters and the wild.