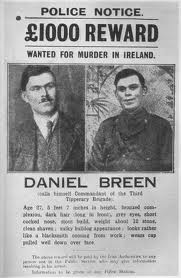 And so after Christy Cooney handed over the silverware, and Eoin Kelly delivered his Captain’s Eulogy, Tipp sub and last year’s starting midfielder Pat Kerwick took the mike on the Hogan Steps for a stirring rendition of the Galtee Mountain Boy. “I joined the Flying column in nineteen and sixteen. . .”

Surely this would be the tipping point for the fans to break the levee. . .

But as the ballad unfolded, and Kerwick recounted the exploits of Sean Moylan and Dan Breen, the delirious Tipp fans sat in their seats and listened, or stood cheeks pressed against the plexiglass fence around Hill 16.

I looked with a mixture of bemusement and disappointment at the serried ranks of Stewards in their end of match positions doing their job, and the Tipp supporters penned in. Jesus, if their forefathers had been this pliant the 26 would still be under the jackboot of colonial oppression.

Undeterred, Kerwick kept her lit: “Arrested by Free Staters and Sentenced for to Die. . .”

Still the Stewards held the orange barriers up, the last few streamers floated from the stage managed production. I could feel the glow of self satisfaction from the Ard Comhairle section.

“The men that fought for liberty and died without a sigh, May their cause be ne’er forgotten, said the Galtee Mountain Boy.”

Indeed. Suddenly, there was a peal of thunder and a crack of lightning,  loud as the clash of an ash stick breaking. Dan Breen turned violently in his grave to bellow at Micheal Cusack what the fook was going on.

“I thought this was an Irish Association,” he thundered at the Founder. “If I was up there I wouldn’t be standing behind yon window on the Hill, watching a Tipp man lift Liam with a Corkman watching on.”

“Time’s is all changed Dan,” was all Cusack could muster, as his own successor beamed in pride at the well organised scene below him, health and safety niceties observed, risk assessment boxes ticked and due diligence observed. This after a game in which thirty grown men set about each other with stix. Is the world gone mad or what?

Years ago winning teams used to light up a fag on the Hogan steps. Imagine the difficulties that would have caused, had Noel McGrath decided to spark a Major in celebration.

But, calmness reigned. The Croke Park sward never looked as green after a game. Afterwards the airwaves were jammed with the PTB spin doctors proclaiming what a spectacle the presentation was. It was a spectacle indeed and plenty made a spectacle of themselves with this charade.

And as for The Galtee Mountain Boy, the music in my heart I bore, long after it was heard no more. In fact everything after the final whistle blew was a bit of a bore. Everything before it was the exact opposite.

Indeed. And off I went home.

Pretty much useless things I found on my desk.

Things that annoyed me intensely this week. Magnificent seven.

My daughter recently took part in a show organised by the dancing school, of which she is a (minor) part. The particular troupe of Irish Festival dancers regularly attend shows abroad showcasing their undoubted talent. And each summer they put on an event in the local theatre offering parents such as myself the opportunity to pay and watch their little treasures dance to their heart’s content.

And so the last eight weeks or so of the summer have been occupied with the logistics and time of running these would-be stars of the stage back and forth to rehearsal. Among the casualties of that particular exercise were either my points-free driving licence or my wife’s points-un-free licence. Those eagle eyed boys in blue or their camera operators clocked our car doing the wrong speed in the wrong place but for some reason sent the ticket to the guy we bought it from over four years ago. Time will tell if efficiency rules among the Traffic Wonks and it gets sent to us. Let’s see how efficient you are boys!

Anyway I digress. The tickets for the aforesaid show were £11.00 each, not a lot you might think but steep enough for a troupe of amateur dancers. When you factor in the in-house marketing job my daughter did to unsuspecting aunts and grannies seven people were signed up to go. No discount was offered to those parents who had already paid for the lessons to enable their would be Jean Butlers to take part in the show, having paid in time and Speeding points to get them there and back. Is it too simplistic to suggest that without our children there would have been no show or is that a tad curmudgeonly?

We duly took our seats in the second row for the marathon two plus hours of Irish dance, and  various other tunes from the shows and pop hits given the same  treatment. At times the dancing was absolutely brilliant, in particular the sequences of tap.

Girls in their twenties, teenagers, prepubescent and early primary school kids whirled, jigged, reeled and tapped round the stage with great vigour some looking positively miserable, maybe they were thinking of all the time and money their parents had invested to get them there. Others jigged, juggled and wobbled their stuff with great abandon. Some had more to wiggle than others whilst some of the younger dancers seemed to wish forlornly that they could thrust, wiggle and jiggle just like the older dancers. We just wished they wouldn’t try.

Frankly there was something disconcerting and overly three dimensional  and dare I say it in your face, about the serried ranks of dancers heaving and thrusting about on the stage, embonpoints all a shudder. No doubt some lads would have enjoyed it –  I found the sight of the younger girls acting older decidedly uncomfortable and incongruous, especially set alongside some of the innocence of the very young dancers. These ones of course will have been looking up to the older girls and the way they conducted themselves.

The highlight for me was when one girl’s hair grip flew off, landing on the stage. And as we watched for one of her colleagues to stand on it and possibly injure herself, one of the stars of this year’s show, and last year’s, swept across the stage, feet a jigging and expertly hoofed the offending accessory sideways stage right at a rate of knots, before karooming off in the other direction in a flurry of black tighted legs skipping an intricate jig with the odd buck lep thrown in.

What was it like then? Well, with some judicious editing of some of the more self indulgent pieces that went on, and on, and on. . . it would have been a tighter and more enjoyable show. But sadly in most cases each production piece was emphasised, over emphasised and reinforced and consequently went on too long. And the main dramatis personae were always the same which became a bit tedious and over familiar.

Anyhow, in the end my daughter enjoyed her five or six minutes on stage each night. I couldn’t help but think she isn’t one of the in-crew in many ways. She loves her dancing and skips about our kitchen without a care in the world. She goes to classes and rehearsals and seems to like it. But. . . hard to know.

After the latest show it’s much easier to separate the dancer from the dance. The former is an innocent wee girl who loves to perform and dance. The latter? Too knowing. Too adult. Too grown up. Too self indulgent. And probable a dance too far. Won’t be there next year, that’s for sure.