You see him at games now, stooped over a little more than before, hair whiter, wispy beard more straggled. It’s definitely him.

The old style club jacket has an L shaped tear at the elbow, so the innards hang out slightly but he has never felt the need to buy a new one.

Times have changed for him since. Back then he used to line the pitch pushing the whitewashing line machine along the guide line whilst smoking those unfeasibly thin rollies. Occasionally someone would interrupt his work and he would stand hands in pocket gazing over their shoulder. ‘aye.’ aye. Aye. I know. He would never say I have to get on here even tho the paint might leave a dribble on the pitch. If that did happen he had a bucket of fine sand and topsoil that he would throw down to absorb the whiteness before trowelling it up and away over the fence.

In the bar he drank pint bottles of porter with an occasional support cast of John Jameson. He never bothered much with the other club men in the bar. Avoiding conversations effortlessly, often seen deep in conversation with a nervous man called Haggan who some said frequented the local hospital for people with mental issues. The two would stoically tolerate interference from others on their chat. Even the pisstakers among younger club members and a visiting ladies football team to the bar got over familiar. One doll strutted her stuff over familiarly to our man and received the put down “they’ll be well handled before your children ever get to use them”.

A couple of years back Haggan died, penniless by all accounts. His funeral though was a thing of wonder. Oak coffin, club jersey (noone knew why) and a plethora of high profile mourners who all shook his hand.

Three years ago a man called Vincent MacRuairi reckoned he won the club lotto. He went to claim his prize wielding his winning stub. There was a discrepancy of sorts between the stub and the ticket. Result tampering alleged and the prize withheld. MacRuairi needed the cash he claimed, it ws rightfully his he asserted. It ended up by circuitous route with the DRA being a GAA matter. The ruling was a watershed. “we have no hanging chads, or corrupt practices. What we have is common decency and natural law and we rule the appellant did not on this occasion fulfil the conditions to win the club lottery.”

Our friend then continued his business in his own quiet way.

Each week the lotto men sold their tickets. And at mass. Or in the bar. They would see him come and go. And the prize remained uncalled. And he remained The Last Person To Win The Club Lotfery.

Postscript: they say Lightening never Strikes Twice. On Sunday night last, a winning ticket was sold. The winner received the largest amount ever paid in a members’ club lottery. He was and remains The Last Person To Win The Club Lottery.

Today it rained, rained and rained.

The roof’s leaking somewhere gonna have to get that checked out. It shouldn’t be but that’s another story.

The living room needs painted and the leylandii need cut. The trampoline’s FUBAR thanks to Peter. My mothers car clutch has gone again. Amidst all that disintegration and disrepair life goes on and onwards.

At least Soda’s back in decent shape. Happy chasing the cat, arthritis permitting. If I can do the same at her age I’ll be happy enough. 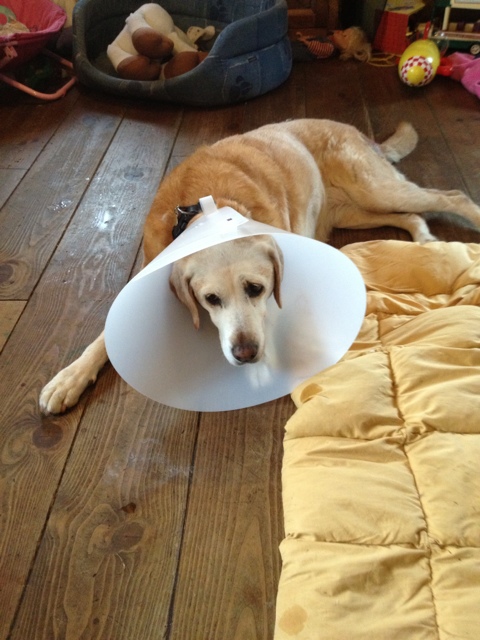