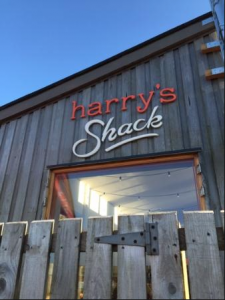 This morning I ventured across to the Ramada in Portrush for an InvestNI session on commerce for local business: How to make your online marketing work for your business.

I had recommended the event to a couple of clients and went along to see what the level of knowledge was locally, to pick up some new ideas and see generally what was what. One of the main attractions was the presence of Donal Doherty who runs Harry’s Shack, a fantastic eatery on the edge of Portstewart strand that has attracted praise from restaurant critic Jay Raynor among others.

It was a hidden gem when it opened (belatedly) last summer. Belatedly that is, to us locals, who watched it slowly get kitted out and refitted for action over August ’14 and hoped that it would be opened for the summer season. It has since bucked the trend with its casual sea shanty atmosphere, wood hut ambience and quality food. Whether a coffee, a simple fancy breakfast to a more substantial meal it is a quality spot. It has gone from strength to strength since, in no small part to clever use of social media to build its profile.

Today, it was the quality and frequency of this social media activity that we savoured rather than the food on offer,  as Donal took us through a series of simple but effective approaches. His advice ticked a number of key boxes. It was practical and relevant and best of all didn’t demand huge resources:

Donal reckoned about 20-25% of sales are directly attributable to social media. He outlined the issues that were proving problematic, customer cancellations at the last minute and the role of Twitter in filling eleventh hour no-shows by posting vacancies. His next step to address some of his promotional, informational and customer service issues is to launch a website. The cart after the horse by conventional reckoning but you can’t criticise what has been done thus far. He touched on the issue of negative reviews online of which there are few, and of them the origin is doubtful. His advice on complaints: Address them up front. Again, this wasn’t a major issue in the flesh or on social platforms for the Shack.

I found overall that some of the work I’m doing with some of our clients is ahead of what’s out there. There is a very low base in some local small business. Anyone wanting to discuss their needs, give me a shout for a chat.