Easy listening whilst I work…

Back Down South, Kings of Leon

Everything Is Free, Gillian Welch

In Spite Of All The Damage, The Be Good Tanyas

Somewhere Over the Rainbow / What a Wonderful World, Israel Kamakawiwo’ole

Wish You Were Here, Pink Floyd 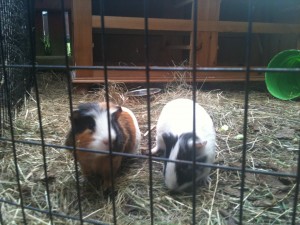 The Shawshank Rodention - back behind bars where they belong.

And another thing. . . as if by magic, when I was driving the children to school this morning what should blow across the road in front of me, only one of the Coleraine Borough Council composting bins! FFS like! You couldn’t have scripted it.

So, not only did we not get one when they were handed out free last week, but those houses that did get them are in large part empty and the bins are blowing down the street.

I debated briefly the possiblity of stopping and firing the damn thing in the boot of the car , say no more. However a bit of Catholic guilt kicked in and I thought of the shame and embarrassment of getting caught and charged with stealing a compost bin. It’s not even like it would be for me.

Anyhow, I digress. Last night after I returned home from being guest at the rugby club with Méabh, I was confronted with the news from a tearful Leo that the guinea pigs were still outside. It was nearly ten o’clock. A whole vista of hystrical children loomed before me.

The story so far, Santa very kindly decided to bestow upon our house the little furry gifts that are guinea pigs. To be honest there’s something mildly amusing about the way they kinda dunt about the place. They also chirp at each other in guinea pig language. The one bit I understand is guinea pig for “look at that big bollocks trying to catch us” when they fix me with their beady eyes.

I rather scathingly derided my daughter for being out-thought by a guinea pig once when she couldn’t recapture them. It’s as if they heard the remark and have taken great delight in outfoxing (or out guinea-pigging) me ever since as I try and get them back to their hutch. The wee hoors.

Back to last night’s shenanigans. Leo was distraught because he had been unable to recapture the two animals after they escaped from their enclosure and having taken refuge under the garden shed they refused to come out. He was upset that Sorcha who was asleep would wake up in the morning and, upon finding out that Ziggy and Titan were at large, would be inconsolable. I was surprised at how upset he was. Usually it’s only that bad when he’s asked to do something about the house, or lift his unclean boxers.

My observation to himself and Cáit to man up a bit, that nature was red in tooth and claw and that it was unlikely we would ever see the darned animals again, went down like a hooker with traintracks. My worry was that Mugsy our tomcat or some other blood crazed animal would wipe them out with one swipe of his paw.

So, undaunted, out I headed once more into the dark. This time I spied them, there they were still under the shed, holed up like Butch Cassidy and the Sundance Kid, merrily scampering about eating grass as they do, and no doubt shitting prodgiously as they do also with great abandon. Vigour even.

Unable to coax them out from under the shed, the hunt was called off due to bad light as the rescue services might say. Next morning at the crack of dawn Angela got out there first and managed to catch Ziggy. He quite biddably walked over to her when he saw her. Titan is more of a recalcitrant rodent and an hour later he was still at large.

More to the point he had broken cover and left the safety of the shed and was on the loose. We had lost track of his whereabouts too which was worrying. I had heard reports of buzzards over at the University. Would one swoop and have Cuy for tea?

Eventually though, even Titan obviously longed for the green green grass at home, as we spied him  scurrying along and trying to break back into his wee stockade. Finally, the Cool Hand Luke of the rodent world was trapped with nowhere to go.

As he backed himself into a corner I grabbed him and within full earshot of my assistants Cáit and Leo held him up to my face and said venomously  “Titan, you wee bastard.” He looked at me with the beady eyes, his cow’s lick funnier than ever and replied in guinea pig “ha ha you big bollocks I won again.” Well I imagine that’s what he said.

The punishment for the two of them?  A couple of days in lock up in the house methinnks. I couldn’t be arsed with another episode of that.

And  as for the the compost bin? Thanks be to God we didn’t have one on this occasion for we’d have never got the two hoors out if they’d gone in there. Voluntarily that is.

Still, hopefully one day we’ll maybe get one, a bin that is. . . and so the work goes on, the cause endures, the hope still lives, and the dream shall never die. Just like the guinea pigs. 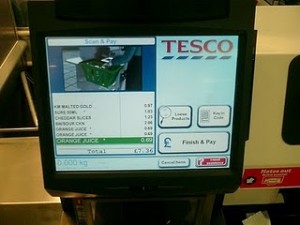 TESCO Self Service: Please place your boot in the bagging area.

Our house is coming down with new energy saving lighbulbs. They are a total waste of time unless you like murky, eye damaging half-light. In my daughters’ room I stumbled about for ages in the dark before Angela kindly advised me that to activate the stronger light option, you have to switch the switch on twice. Great.

I stand to be corrected but is this the result of more do-goodery coming from Brussels. I suppose if you have an army of politicians and eurocrats you need something to keep the hoors busy.

Next up TESCO. Every Little Helps.

Indeed it does especially if you are the genius that thought up TESCO self service. Let’s just explore this for a minute. I go to TESCO, I wander round their store doing my shopping, being conned by their clever two for the price of 1.8 or whatever the ratio works out and all the other deals. I buy loads of stuff I don’t really need especially if I make the cardinal mistake of shopping when hungry.

Finally I go to the till and rather than some employee do their job and check through my groceries, I do it myself while some jobsworth hovers to make sure I’m over 18 and that I can actually work the technology.

Absolute genius, avoiding the staff salary, whilst the customer does it all himself! Brilliant.

This set up is only bettered by the self service GO Filling station in Cookstown which is straight out of George Orwell. Not a human being in sight other than the other mystified fuel buyers filling their cars according to the instructions delivered by the pump. Again, a spark of genius.

And we’re all sheep for falling into this trap. Well let me tell you, I want my goods packed by someone. Not necessarily all the time, but sometimes when I just couldn’t be arsed scanning through and packing my own stuff.

I have an aversion to the self service model since one night a TESCO drone accused me of not paying for part of my groceries. The apparatus wasn’t working and one item had not scanned. This chap, who quickly saw the error of his ways after our brief but robust exchange, was lurking about being particularly unhelpful. Maybe he’s on a bonus to catch would-be grocery thieves like myself.

Had I wanted to thieve from TESCO I should point out I would have gone for the bottles of expensive champagne or a special offer flat screen TV. Not a loaf of bread and some cut price vegetables.

Finally… the local Borough Council have decided in their wisdom to distribute composting bins. But only to some people. At random. So loads of students are now the proud owners of compost bins whilst people like Angela who actually want one are not.

I don’t condone unlawful activity but… if anyone should like to donate one,

it will be going to a good home.

Various random things @ the weekend. Friday night taking U-8 coaching. What I would consider a failed session. Some of the lads were being difficult, I didn’t deal with them very well I thought. Went home very frustrated & annoyed with myself. Yes they were badly behaved including some that should know better, but at the end of the day it is my job to coach them.

I went back in to get Leo hurling & watched him take a breathtaking catch on the run. Highlight of my evening. The back garden matches are obviously paying off for him! This afternoon myself & Angela took the two boys on in a game of football. They won. Again.

Saturday morning up at 6.00am, wrote a piece about Eamon O’Shea. Then off to the beach with Hub. Hard to beat Portstewart strand at that time. No people, other than the odd jogger & a few other dog walkers. Hub befriended a couple other black labs & rolled in some foul smelling stuff. Manky or what.

Home, to chase Cáit & Leo off to early morning swimming. Then in to coaching myself. The ratio of coaches to boys was 3:1. Not many clubs can boast that @ U-8. I redeemed myself by taking one of my friends from last night. Much more rewarding, he seemed in better form & it was more enjoyable. Cracking match at the end. These are the days for it. Can’t wait to get outside.

Saturday afternoon A. gone to Derry. Me to follow after Cáit’s party – It was ‘Hot Barbara’s’ daughter’s party, as she was apparently known in her younger days. I called her it once & she reddened & didn’t seem entirely comfortable. Hmmm.

For weeks before we went to Croker I imagined a thousand times Méabh on the steps of the Hogan Stand. The image taken by Caroline Quinn captured it perfectly. Déjà vu. I bought the original from Caroline, & went & had the print framed, two copies. One of me, one for Méabh. I can see it on the wall here as I write this. I gave Méabh hers on Sunday, she was away shopping with Oisin the Cheshire cat on Saturday.

Saturday night out for a meal in Derry with my Uni friends Kierany & Ann Marie. Good craic. They never change. Liking life in Derry too.

Sunday a bit disoriented by the time change. Up the road home after Sorcha decided to wake up. Home in time to sleep for an hour. Delayed red wine fatigue. Off to Ballinderry where they gave us a guard of honour onto the pitch and proceeded to kick us apart, with the ball mind you. Physical stuff but what impressed was their ability to find one another with the ball.