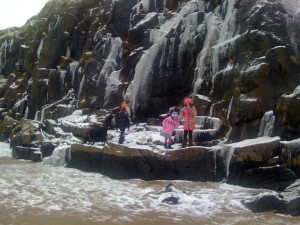 Someone was asking me the other day what the

Frozen in time, the familiar - unfamiliar.

beach and the sea were like in the winter when it was freezing. Usually the salt air prevents too much ice forming but last Christmas with the massive drop in temperature there was ice everywhere.

The beach at Portstewart was like something from CS Lewis.

The water run off from the hills made the stalactites, meanwhile the water lying in rockpools and little rivulets had frozen solid. Whilst I’m no fan of the bitter cold but I hope we see this again.

Last week I travelled down south, it was four degrees colder inland than it was at the sea. This would be common enough. Last winter also, my mother for the first time saw the two rivers in Omagh frozen over.

Our ones are looking forward to more snow because last year we had hours of fun sliding down the fairways at Portstewart golf club.

As children we used old fertilizer bags or whatever sort of plastic sheeting we could get to fly down the hills at the Camowen Hill home. Nowadays we used plastic sleighs and sliders that you can also use in the  dunes at the beach even when the weather is fine.

Whatever, the snow brings out the child in each of us. Hard to resist taking a furtive slide to yourself, even if it means falling on your arse. Better to have tried to slide, than stood like a square. Eh?

from The Sea in Winter by Derek Mahon.

My daughter was doing her English homework this morning. Why not last night?

Well we have visitors and things are too much craic in the evening to bother about homework. Anyhow, I digress, it’s a habit I learned from my mother.

The topic of the homework was prefixes. She had to place particular prefixes in front of a series of words and also explain the meaning of the prefix. In other words she had to show she understood what a prefix does to the word it goes in front of. She made the usual mistakes whilst getting the hang of it, but seemed to be cottoning on rightly.

So then, the prefix she had to use was ‘pro’, the example given was ‘proactive’ and she came up with ‘protein’.

No, I said, ‘tein’ isn’t a word in its own right therefore in that instance ‘pro’ isn’t a prefix. Likewise with ‘professional’, ‘production’ and so on.

Eventually she settled on pro-Europe and pro-choice (we didn’t get into the specific meanings of that – it will keep for another day).

As I made school lunches, sandwiches for the others – tuna, and banana for Sorcha if you’re interested – she says ‘Daddy, what about ‘sus’.’ The example given was ‘suspect’.

In the name of God, and this is in a textbook. I explained that there is no such word as ‘pect’ therefore ‘sus’ is not a prefix, ergo the book was wrong. And Cáit, in fact ‘sus’ does not act as a prefix in any context. I love it when the book is wrong.  I pointed it out to my own teacher in primary school once and he hated me for it.

Little did I suspect when I got up this morning that this conversation would prefix my day. I am awaiting with profoundly bated breath the markings of the teacher.

If I was a poet and I’m not, more’s the pity, I could write about the start of this week. What is the Zen koan ‘Chop wood, carry water.’ This morning a friend, my nephew and myself had an entirely enjoyable time chainsawing three piles of wood I had accumulated over a couple of years. I felt like the star in a Seamus Heaney poem, carrying, lifting, moving, helping as my good friend Richard Carey did the sawing and Ciaran waited for his hand to become chain-sawed!

In the current climate it’s equivalent to a day’s work in the money we saved! I feel a more subsistence based lifestyle coming on for a lot of people in the days ahead. The hens may have to up their production levels.

Getting some interesting reaction to a piece I wrote the other day. Interesting topic, challenging – made a few people a little edgy. All good. Chased up a few new clients and prepared for a visit to a another client come Wednesday.

On Saturday for reasons best known to Ulster Camogie I was at an event in a place called Madden in Armagh. Very impressed with their facilities, less so some of the tripe talked! Afterwards we headed to Monaghan for a team bonding exercise so feel duly bonded after laughing my head off all night!

Tonight it’s Monday so it must be Armagh for this course. So far been very good. Missing my ma’s birthday party to go. I’m a bad son.

On 15 August 1998 I was in a shop in Buncrana when Angela came in, in a fairly agitated state, and told me that there had been a no warning bomb in Omagh. Straight away I went to the nearest telephone box to ring my mother. There was no answer.

We had returned from Peru the previous weekend having travelled there for a holiday after getting married. We were due in Omagh that Saturday, but the weather being good my mother had decided to visit us instead earlier in the week. We recounted our tales of Peru and she returned home. Then instead of going to Omagh, on the Saturday we went with Angela’s mother to Buncrana to collect some wedding presents. The irony of being in Buncrana when the Omagh Bomb happened was not lost on me.

As we drove back to Derry and from there onwards to Portstewart, the details of the mayhem in Omagh unfolded. I had eventually got a hold of my uncle Jimmy who was able to tell me that my mother was safe. But he told me, the scenes in the town were devastating, there was blood running down the street he said. His son had witnessed the aftermath of the bomb. Things weren’t good.

When I got home the telephone lines to Omagh were still down. No-one could get through. It was a time of sheer panic. I felt removed from the scene as I no longer lived there. Angela’s brother went up from Derry to volunteer but not being a surgeon he wasn’t required.

The name of one of the casualties shared the name of a close friend, Aidan Gallagher. Over time it transpired it was a different Aidan, a casualty nonetheless. My friend Aidan’s brother had a nightmare trying to locate his mother among the carnage in the County Hospital. Turned out she had gone straight home when the bomb warning was made and was home, safe and sound.

I found it difficult to watch the television. The scenes was unbearable. The Tyrone County Hospital Grounds were like a playground to us growing up. Here they were catapulted onto the world stage as a scene from a disaster movie.

Thanks be to God no close friends or relatives were caught up in the bomb. But I still knew people who were. The Grimes from Beragh I knew at school and played football with them. They lost a mother, Mary; a sister, Avril; a one year old neice Maura, and two unborn twins. Doreen McFarland lost her teenage daughter Samantha. Doreen is now our next door neighbour in Omagh.

My mother knew Libbi Rush and I had often been in her coffee shop at the foot of the town. My friend Ann McGrath lost her father in law Sean, the last to succumb to his injuries. Several years later I met Paul Marlowe at a football function in Jordanstown. He lost his sister Jolene. Still in visits to Omagh I see people maimed or injured or carrying the mental scars.

I attended the memorial service a week after the bomb. I felt I had to be there but I felt a sense of removal and distance from the real people of the town who had lived through the previous week. One of my friends went to all the funerals. Of people he didn’t even know. He felt he had to be there.

I never really stopped to ask my mother if she was OK. I was partially numbed at the short frantic time I spent trying to locate her but I suppose I knew in my heart of hearts she was alright. I never stopped either to think what if she hadn’t, if she had changed her habits and for some reason been in the town that day. Such a simple decision. Many simple decisions that day became a matter of life and death.

My mother stoically absorbed the bomb and all its implications. An Omagh woman her entire life, like thousands of others, God knows the impact upon her. Doreen is a good friend to her, at times I think her loss overwhelms her too.

I remember walking to the memorial service with Angela. We arrived at the Bus Depot in the town. Again a familiar place to me: over there we sat one summer’s evening on the riverbank drinking a carry out. Down there I used to walk a girlfriend to the Carrickmore bus when I was at the Christian Brothers’ School. Around me hundreds of familiar faces, haunted, grief stricken. Friends looking empty, distraught. I saw Eamon Cunningham.  He just looked at me and shook his head.

The silence was unbearable. And then Juliet Turner sang Broken Things. The song hung in the air, drifted around the trees at the Tech, swooped over the Strule, and skimmed the surface of the Drumragh and the Camowen, down over the bridge towards Campsie.

Her delivery clipped, hesitant, childlike, beautiful. It was as if in all the mayhem, carnage and debris, time had stopped and the innocent, the maimed and the dead all stopped their journey to speak to each of us individually. I have never heard anything like it. I stood, a stranger in my own town and wept for the living and the dead.

Nothing compares to Omagh. Nothing.