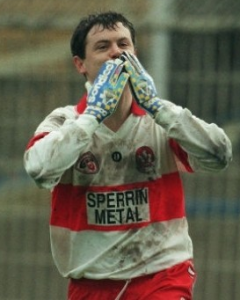 The morning after Derry won the All Ireland in 1993 I was on Radio Ulster to promote some event or another. Joe Brolly was on immediately before me.

Joe was still in celebratory mode and totally and utterly irrepressible. I’m sure the listeners of Ulster didn’t know what to make of him first thing on a Monday morning, live from Dublin, unslept, unkempt and on a roll. I groaned, I felt like I was going on air after the Beatles.

Of course, Joe has been all over the media for the last few days. In case you didn’t know, he donated one of his kidneys to a fellow coach from St Brigid’s GAA Club in Belfast. Shane Finnegan has had kidney problems for the best part of twenty years and has had a harsh regimen of dialysis and treatment. His only hope was a transplant from a living donor.

According to various reports, his clubmate Brolly sidled up to him having heard this news, and said more or less, I’ll give you one of mine. His link with Joe Brolly is merely that he coaches a club under-10 team with him, and their children play together. Having lost his cousin and transplant patient last year, Catherine Quinn, wife of former teammate Danny Quinn, Joe Brolly evidently felt he needed to do something to help and this was the obvious way to do so.

Paddy Heaney explained today how the impact of losing his cousin Catherine last year affected Brolly deeply, how he was moved to do something by the thought of children possibly losing a parent. It was the noblest of causes.

Often we see celebrities, sports stars and the like involved with charities as patrons. The idea is that in PR terms if a celeb endorses something it will bring more press coverage, make for a better photograph. There is no doubt that many of these individuals are motivated by a genuine concern for helping others. There are others who realise their personal brand portfolio is helped by being associated with a few worthy causes. Whether they truly support the cause, no-one knows.

In the case of Joe Brolly, actions speak louder than any words on a page or a television studio. He is no ordinary Joe. He’s known to most of us GAA fans as a handy former corner forward with a penchant for winding up opposition corner backs and their fans by blowing kisses after crucial scores.

The kidney Joe gave away last week survived a few hardy punches over the years from defenders hailing from Dublin, Cork, Down and Donegal, but the most bruising (and most definitely the most inconsequential) from despairing Tyrone corner backs.

Over the last number of years of course Joe is probably the pundit that most of Ireland loves to hate and love. Although he has winding up Kerrymen down to a fine art, if you pick through the outrage and annoyance, there is a lot of wisdom in what he says. Most of the time. Those that hate him are on a sticky wicket now.

This interest in helping others, it’s not a new thing. For a long time he has been an advocate for and supporter of Blood Transfusions. His interest goes back at least to his encounter with Brian Óg McKeever, a young 17 year old footballer from the Steelstown Club in Derry City who suffered from the Leukaemia that eventually claimed his life in November 2008.

The club is since renamed Steelstown Brian Ógs in memory of their former player who succumbed to his illness, but left a legacy of courage, hope, and honour in the face of unsurmountable odds. The name is borne with pride to this day by everyone who wears the blue and gold of CLG Bhriain Óg Bhaile Stíl.

The experience clearly left a mark on Joe Brolly. Writing about the loss of such a young talent Joe said:

“Eamonn Burns told me once that Brian was the only footballer he knew who had Tony Scullion’s anticipation. What a pity we will not see him in the red and white of Derry. What a pity that the world has been deprived of a boy like that. The Steelstown club has retired the number five jersey. They have also organised a Blood Drive on December 15th next at their clubhouse on the Ballyarnett Road. The City of Derry rugby team, Derry City Football Club and the Derry senior football squad will be there to give blood.”

It is a thought-provoking piece that I commend to you.

When I first heard the news about Joe Brolly filter and flitter through on Twitter at the weekend, I thought it was a wind up. I soon realised it wasn’t. As the week goes on it is hard not to marvel at the total humanity of the man. It is a stunning, stunning act of kindness.

Joe has a reputation for being outspoken at times controversial. But underneath that, is a guy who has done nothing less than offer his club mate the gift of life.

It is a humbling tale.

The US Coach John Wooden wrote that character is what you are, reputation is merely what people think you are. If we didn’t already, we now know what Joe Brolly is.

Tenders. That old chestnut. I wonder have the people that write tenders ever actually completed one? If they had they might spare a thought for those of us that, from time to time, are required to ‘do them’ to try and earn a living.

I recently went for one and praise God was successful. Took me about four days equivalent in hours to complete it. I also worked on another for a client, they were unsuccessful falling at a minor administrative hurdle, not being able to tick a particular box. Another one I assisted with during the summer has yet to be awarded. We have run out of bated breath to wait with.

The inclusion of seemingly important but arbitrary criteria like ISO 2000 are a serious pain in the arse. Granted, their inclusion is an easy hurdle to place in the way of a would be supplier. To me ISO suggests that you are good at ticking boxes. It doesn’t necessarily mean you are a good manufacturer, printer, designer or whatever your expertise. Therein lies the rub.

Likewise a client recently was required to demonstrate their ability to provide business continuity in the event of a fire, flood or other act of God. The fact is that had there been any natural or man made disaster that impacted on production, they would have been able to continue their business by subcontracting. They just hadn’t written down how they would do, so busy were they actually getting on with doing what they do.

I must admit I am gamekeeper turned poacher. I used to devise these fiendishly clever criteria thinking I was the big guy. How the suppliers must have despised us. I faced down a supplier once, he was expressing legitimate concerns about not getting a face to face meeting. Our process was rock solid, tight and fair. This guy just wanted the opportunity to tell us he could do the job. His business later went bust. Not my fault, but I’m sure we didn’t help.

I accept people need these sorts of processes. It’s nice it you happen to win a few but often you don’t get that satisfaction. And as one client told me, these things are often written so the right person gets them. That’s true.