Line of players at each gate, 1 v 1 in middle, as soon as you shoot you defend the next player running.

Bring above together in ¾ length pitch drill. Condition to favour defenders/forwards as required.

My main concern with my fresh fish delivery from Mourne Seafood wasn’t what to do with the fish when it arrived, but the hope that that our tomcat Mugsy wouldn’t intercept the delivery before I got my hands on it. I was out, but the delivery man followed my instructions to the letter. The Cat couldn’t get his paws on it. 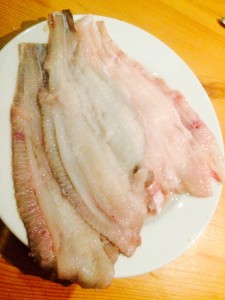 It all started with a passing comment to my son that Mourne Seafood were doing deliveries. A big fish fan despite his tender years – 13 years old, he has tucked into monkfish, salmon, squid and mackerel with relish. I think it started one day I caught him nicking a piece of lobster off my plate on holidays in Scotland. He pestered me for days and had been doing his own research online.

We carefully perused the fare on offer on the Mourne Seafood home delivery site. Free delivery over 40 quid, sounds good. A few things in and out of the basket, and a few tasty looking items didn’t make it into the shopping cart. This time. Missing out on selection were Monkfish. Seabass. Oysters. No, this time we went for a couple of plaice, two lemon sole, two tubs of crab claws, scallop meats and some fish pie/chowder mix.

When I arrived home the vacuum packed fish were already in the chilled part of the fridge. Angela a vegetarian had taken a look at the plaice and sole and asked, who’s going to gut them? Can they not send you the fish filleted. She went on to suggest a friend of ours, a retired butcher could do the job. I wasn’t so much insulted…. as challenged.

My reply was no, I’ll do them. A childhood expert at gutting out trout that I caught in rivers round Omagh meant I felt well equipped for the job. Of course trout aren’t flat fish, and I was in danger of destroying an unsuspecting and perfectly good fish if I launched myself unprepared.

Full Of It Filleting

Having checked out a few Youtube videos on how to fillet plaice it was straightforward, removed the head and the guts, trimmed off the tail and fins, filleted off the bone white side up. Then dark side. I was pleasantly surprised with my effort especially the way the leftover skeleton looked like something from a dustbin in a Tom and Jerry cartoon.

The two plaice were for my mum, the heads and various off cuts were left for Mugsy so he didn’t take the hump. After dressing the plaice I repeated the same approach for the sole. I’m no expert but the flesh seemed slightly softer so it was marginally more difficult to get as precise a cut with the knife. Nevertheless the result was decent enough.

For supper that night, the fish were calling me from the fridge. I relented. The crab claws I ate with a chilled sauvignon blanc having made up a dipping sauce with a bit of ginger, chilli and garlic. Tasty indeed. Our lad was well impressed with that. The scallop meats I cooked in a very hot wok with oil and some ginger, and a few bits of pancetta. They were extremely good. Tender, tasty and juicy.

I pondered whether to attempt a fish pie or chowder with the fish pie mix. Memories of the West and pints of stout washed down with chowder and wheaten bread won the day. I’d never actually made chowder before. I have now; it’s a pleasure that I’ve missed all these years. I’ll be catching up for lost time I think.

I scoured in through the fridge. Some left over potatoes, great. Some more pancetta. A bit of vegetable stock gave the proceedings a liquid base, helped with a small splash of white wine. I added in the remaining crab claws when the mix was starting to brew and finished the job with a carton of cream. The result? Awesome. I had enough of the chowder for both of us with a couple of bowls left over for the next day’s lunch. So hearty, there was no need for dinner that evening.

When I checked in with my mum she’d fried up the place in butter and served it with peas and potatoes. She found them to be light, very tasty and very filling.

The lemon sole I left to the lad to eat. He did so with relish. And returned to the kitchen to deposit the plate scraped clean he asked me, are we getting more fish from Mourne next week.