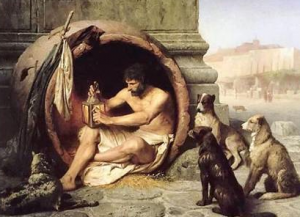 The word Cynical first applied to the Greek philosopher Diogenes who was born in Sinope and who lived and acted unconventionally in order to expose the falseness of modern conventions.

He was some boy was Diogenes, exiled from Sinope for defacing the currency of the time, possibly encouraged to do so by the Oracle at Delphi.

Diogenes lived like a tramp, sleeping in a tub in the street, begging, going to the toilet unceremoniously when the urge required it. He also pleasured himself in public in the market square, observing he wished he could ease his hunger as easily by rubbing his stomach.

For those that would sling the word about with abandon, ‘Cynic’ is derived from the word ‘Kunikos’ which means ‘dog like’. Anyone who has a dog will know that it capable of many things. But fundamentally it acts on instinct.

I have a new dog. It hasn’t pleasured itself in the market place just yet, but its tongue certainly reaches the parts. One of the abiding principles of Cynicism is that if an act is not shameful in private, the same act is not made shameful by being performed in public.

Our man Diogenes when asked by Alexander the Great to name his one wish, replied pithily: “I wish you would stand out of my sunlight.’ He once went out and about in Athens in broad daylight carrying a lighted lamp seeking ‘one honest man.’ Such was his impact on Alexander, the Great man observed to an associate ‘If I weren’t Alexander, I wish I were Diogenes.’

In their approach they were certainly anarchic these Cynics. They avowed an ascetic lifestyle which they found necessary for moral excellence because it made them resistant to pleasure and pain.

Of late, the word cynical has been the most over used word in our lexicon. Cynical fouling. That is what a dog will do. And that indeed that is what Diogenes did. Physical activities without standing on ceremony. Take a crap. Take no crap. Makes no difference. Not a jot.

The Cynics preached the universal brotherhood of man, they were cosmopolitan and anarchic. Lived life their own way. Acted as they pleased. Their Cynical views unthinkable to other Greeks.

Antisthenes was a Cynic too, and teacher of Diogenes. He had witnessed the death of Socrates. Of other people casting their opinion he remarked: ‘It is better to fall in with crows than with flatterers; for in the one case you are devoured when dead and in the other case while alive.’

We’ll leave the last word to Diogenes the tub dwelling, public wanker and cynical fouler who had little time for sportsmen: ‘Why are athletes so stupid,’ he asked before replying to himself: ‘ Because they are built up of pork and beef.

Depending on who you talk to Diogenes died from either holding his own breath, being bitten by a dog or eating raw octopus. Take your pick.

A few weeks back RTE Sunday Game pundit and Cork hurling legend Donal Óg Cusack sparked off a wave of discussion, debate and derision in equal measure, with his suggestion that Ulster field a composite team in the Liam McCarthy Cup.

To be fair to Donal Óg he was only restating a position already articulated by the GPA, of which he is a prominent member. But. . . anyone that uses words the three words ‘promote’, ‘hurling’ and ‘Ulster’ in the same sentence can expect everything they get from the local hurling cognoscenti.

One of the arguments for the idea was that a combined team would help promote the game of hurling in the province. Currently only Antrim play at the tope level in hurling and despite Loughgiel’s clubs success the county team are struggling to make their mark at that level.

The idea is that a regional team would draw upon hurlers from the likes of Down, Derry, Armagh, Tyrone, Donegal and Down to field a combined squad at Liam McCarthy level. Depending on what model you ascribe to, Antrim would continue to go it alone or would joint the Ulster pack. Supporters of the idea point at the abysmal record of Antrim county teams at minor, u21 and senior level when they venture south.

But, it’s not that long ago that Derry’s hurlers performed creditably in taking consecutive Ulster Under 21 titles and travelling south to take on a Tipp side littered with current senior players, and a Dublin team that contained several of the personnel currently making waves in the 2013 championship.

Amidst Dublin’s recent success we shouldn’t lose sight of the massive injection of funding for coaching and other support that the GAA contributed. Their march to the Leinster title and a second All Ireland semi final in three seasons hasn’t been accidental.

It goes without saying – if you invest in something it will grow. There are lessons there for those that would use those three words: ‘promote + hurling + Ulster.’

It is a feature of hurling nationally that unless there is some sort of serious intervention, the rich will get richer and the poorer stay where they are. There are hierarchies in hurling and the unique nature of the game means it is harder to develop than football.

Within Ulster Antrim are the strongest county but they have their own sorrows to seek. Hurling is under pressure in Belfast. Currently in the senior championship Loughgiel have two maybe three realistic challengers in Cushendall, Dunloy and an emerging St John’s team from Belfast City. Other clubs in the city are having difficulty holding players and others are struggling to field.

It does not bode well for the long-term development of the game. The question is if we adopt Donal Óg’s idea, would the local supporters swing behind a provincial team in the way the rugby supporters have supported the Ulster Rugby team. Is it time to Stand up for the Ulster men in hurling as well as rugby. The same two sports are the big passion in the likes of Cork and Limerick.

Is it an idea that we need to try for a pilot period before we dismiss it out of hand? The GPA , Donal Óg and co seem to think so. Others are less convinced and some local hurling men are totally and implacably opposed.

One thing’s for sure, if Ulster says no, we’ll never know.

For anyone who hasn’t been along to visit they should go down and have a look around. It is a superb example of the Art of the Possible.

Derry GAA PRO Dermot McPeake explains: “Back in 1993 when Derry won the All Ireland for the first time, there was only one pitch with floodlights in the county at Glenullin. Most clubs had only one pitch and seeking pitches for winter training was troublesome.”

Something visionary needed to be done.

“Johnny Burke of Claudy, Colm O’Kane and John Heron and other GAA men began discussions and land was purchased at Owenbeg at Dungiven to create a home for Derry GAA. In 1994 Derry trained there for the first time that year. Since then small elements were added with Go Games in the mid 2000’s bringing clubs in. The new phase brings club championships and completes the circle of usage of the site.”

The top quality playing pitch is capable of hosting inter county gaelic football, hurling and camogie matches. This summer it has hosted Ulster Championship Camogie Finals and Derry’s All Ireland qualifiers as well as Christy Ring Hurling. Year round it is the home base of Derry GAA, Ladies Gaelic and Camogie teams. Development squads at u14 through to senior all train there. More importantly week in week, out it hosts small-sided games and blitzes for underage players from clubs and schools across the county for all age groups from U8 upwards. For those involved in sport it is a home from home.

The Owenbeg complex has become the envy of other counties who dream of having their own ‘Owenbeg’ when they’re not kicking themselves for not having thought of it first. Even Tyrone with the slick Club Tyrone fundraising machine, have had to go cap in hand to clubs, schools and councils to provide training venues for their teams. Until this summer that is, when the impressive Garvaghey complex opened its doors. Antrim have a similar centre for excellence in the pipeline in Dunsilly and Monaghan offer a similar complex at Cloghan.

In the Triangle we can learn a lot from the Owenbeg model. When the Eoghan Rua Camogie team won All Ireland titles in Croke Park in 2011 and 2012, they required a mammoth training effort from December to March to prepare the squad. Had it not been for the excellent cooperation and generosity of the rugby club in offering to hire their floodlight pitch the first year, and the University of Ulster facilities being available the second year, it is unlikely the team could have succeeded.

Their experience locally is not unique. For an area that’s steeped in sport, the provision of places for sport in Coleraine is not at all ideal. In the Triangle area we have successful teams in rugby, soccer, gaelic games, hockey and athletics not to mention world class and Olympic standard rowing. We have seven secondary level schools and numerous primary schools.  We have hundreds of children playing sport competitively every week.

Our council provided pitches are groaning at capacity to handle to the load. From my own Gaelic games perspective the Eoghan Rua club fields 23 teams across four different codes and has its own pitch plus whatever is available to hire from the University. If it weren’t for the University pitches for hire we could not function and for years their fields were our home pitch.

The local soccer leagues have over a hundred teams, which means hundreds and hundreds of players need pitches every single week. The participation levels locally are testament to the enthusiasm of volunteers and the passion for sport in the triangle area. There is a constant demand for places for sport.

Where does Owenbeg fit into this picture? Well the lesson from Owenbeg is that whilst it requires money to get a training facility up and running, when you have a place for sport in established, it also attracts money and interest in its own right.

The Derry County board haven’t finished with Owenbeg, there’s more to come. A 4G pitch and hopefully a hurling wall or two will complete things. But its legacy is as much in what others can learn.

The talk around the Triangle for the last while has been about the Coleraine Rugby Avenue development and what it will mean to the sports clubs of the area. We know what it means. The clubs of all codes are crying out for it. The lesson of Owenbeg is build it and they will come.

And for sport in Coleraine? Build it. Its time has come.