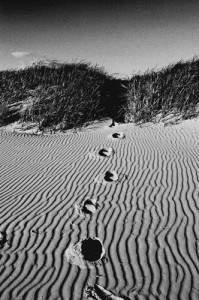 My goal is simple. To be happy doing something I enjoy doing, which is what is happening right now.

It has taken a fair bit of professional experience to get me to this point but I know I can fall back on it at any time.

I spent fourteen years working in the University with some of the most intelligent, self opinionated, interesting and genuinely awful people you could ever hope to meet. Talk about a melting pot. . .

If that doesn’t give you experience I don’t know what does.

There I learned about the media, internal politics, institutional ennui. Working with people with vastly differing views. Writing about many different topics. Nanotechnology one day; Irish Poetry the next; sports biomechanics and fine art the next. Learning about staff management and mismanagement.

A lot about crisis management. Also, that sitting though meetings isn’t a real day’s work. But the higher up the food chain you climb the more of that you do. The meetings. . .

It reminded me of Waiting for Godot: ‘Nothing happens, nobody comes, nobody goes, it’s awful!’

Still, it was good preparation for what I do now.

Written as a travelblog for a hotel client. Oul guff about Cork. . .

When you’re staying in one of their hotels in Cork there’s plenty of fun for all the family within easy travelling distance. Whether you’ve got the kids with you or you’re there for a golfing break with your pals or a romantic retreat the delights of the City are waiting to be uncorked!

The famous Blarney castle was built by Cormac MacCarthy around seven hundred years ago. It is now one of Cork’s major tourist attractions and few visitors leave the landmark without having kissed the famous Blarney Stone. Legend has it that if you do you’ll never be lost for words, although the act itself requires you to lean backwards over a dizzying but safe drop to land a smacker on the famous rock!

Take a Trip to Cobh

Cobh, as it is now known, was previously known as Queenstown and it is famous as the last port visited by the Titanic before its ill-fated maiden voyage. The town’s maritime heritage is well preserved and displayed for visitors. Cobh was also the embarkation point for the notorious coffin ships carrying Irish emigrants to the new world in the USA and for Convict vessels heading for Van Diemen’s land. The visitor centre allows you to experience the conditions aboard one of the cramped coffin ships or one of the convict vessels. Cobh is also associated with the passenger ship the Lusitania, sunk by a German torpedo during the First World War off the Cork coast resulting in the loss of 1,198 passengers and crew and leading in part to the United States entering the First World War

Tee Off at the Old Head of Kinsale

Ireland boasts many famous Golf courses but the Old Head of Kinsale is surely one of the most spectacular and daunting. On some of the holes you’d think the Atlantic itself was the water hazard as the great blue yonder sprawls in front of you. A wayward tee shot means your golf ball sleeps with the fishes. Afters you can head into the picturesque fishing village of Kinsale for some wonderful local seafood and a pint of Murphy’s or Beamish.

Not many people know there are Cheetahs in Cork. All the more reason to visit Fota Wildlife Park where there is a tailor made cheetah run. Animals are central to everything that happens at Fota, There’s loads to do for the children aside from seeing the wild animals. There are play areas dotted around the Park and a host of activities on site including arts and crafts, face painting and African drumming. Visitors can see animals feeding and foraging for food while they enjoy a walk around the beautiful surrounds of Fota Island itself.

The Business of Writing

Given the important of language and clear communication in business, it is remarkable the poor quality of some of the material that makes it into print. I was looking the other day at the website of one graphic design and digital communication agency. Apart from the self indulgent pen pics of their personnel the overall content of their own site was thin on quality copy. They have well over a dozen members of staff. Creative this, director of that, lead creatives, not so lead creatives. Nowhere did it mention among the staff’s portfolios the skill of writing.

Graphic design as a discipline cannot neglect the written word. It is a tired cliché to say a picture may say a thousand words. That is if it is a decent picture. Otherwise that is a get-out clause for material that is lacking coherent content. A key part of design is typography. Typography is the art of arranging type to make language readable and accessible. It relates to the cut and design of letters and the space between them in sentences. It is self evident therefore that words are important. Yet why so often are words the poor relation of visuals and graphics? A highly professional business will retain the services of graphic designers, PR executives, photographers and so on yet they will write the copy themselves. As Red Adair said: “If you think it’s expensive to hire a professional to do the job, wait until you hire an amateur.”

This would be a fairly typical approach in my experience. Certainly some of the rambling incoherent nonsense that used to pass for staff submissions for promotional material when I worked at the University of Ulster showed little evidence of the stellar academic careers these people were supposed to have on their CV. And unbelievably the Faculty of Arts contributors were invariably among the worst. Scientists tend to be matter of fact if not obsessed with their gadgetry and kit. But that scientific brusqueness is better than purple prose and verbose diarrhoea directed pagewise by over sensitive and easily bruised academic egotists.

Breathing some life into copy can be a tricky assignment. The treatment that you can actually give it really depends on the attitude of the client. If they are of the view that you just need to get it out there then no matter how much the writer explains the value of good communication it can be a wasted exercise. Another problem can be adding someone to the project team who fancies themselves as a bit of wordsmith.

I had that with a client who introduced a self styled proofreader who then took issue with content written for a youth audience. My difficulty with this was that firstly it was written in a specific style for a specific purpose and secondly the client had agreed it. It was a debate going nowhere so it ended pretty quickly with an exit stage left.

It is not enough is writing to just pitch up with the pen and start writing. Any assignment requires research, background on the business and some sort of spark to ignite the creative process.

I have long standing clients that have bought into a specific way of describing their products and their brands. They are happy with it because I have explained the approach and the rationale. They in turn have a specific style and tone of voice that works across a series on print and new media. They took a chance at the outset on an approach that was quite different and it has paid off for them and crucially worked with their target audience.

For one client, specialising in industrial painting techniques I wrote their website in iambic pentameter. For another project, a script for an animation I mimicked the rhyme structure of Dr Seuss’s Lorax. I wrote a blog piece for a client that was directly drawn from WB Yeats Easter 1916. In discussing this with Angela she asked why? Had I explained this to the client. Was I being too clever for my own good. What is the point of these literary devices? Well the point is that it gives me a discipline within which to operate. It defines the borders of the job. It offers form and structure. And it can lead to inspiration from a piece of comparative writing whether that be in literature or poetry. It may be for example that one word is the prompt required to pursue a specific theme of writing.

For another client – a men’s clothing company, I used the Odyssey myth to describe the protagonists journey from a shopping expedition to a decadent night out. For another client the point of inspiration was the novel Chocolat by Joanne Harris with its luxuriant confectionary descriptions.