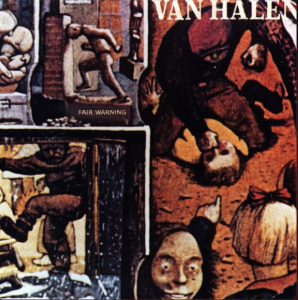 With the passing of Eddie Van Halen I’ve had a sad excuse to listen back through my Van Halen collection. Probably goes without saying, for any Van Halen fans,  their first album is the benchmark. I always liked VH I and II, but for me the albums that are the most memorable are Women and Children First and Fair Warning. The reason?

When I was doing my A-levels I applied to do English at Kings College and University College London. This required me to attend for interview so off I went to be interviewed by a couple of scrufty old profs and a rather stern-looking but attractive woman in a not-quite Ann Bancroft way. She who gazed at me over a pair of horn-rimmed glasses, nodding sagely at my answers. The old duffer beside her in jumper and tweed stroked his beard thoughtfully.

I wasn’t sure what her intentions were. The nadir of the whole experience was when she asked me for a comparison of Edmund in King Lear and Iago in Othello. My response? I replied, “to be honest I haven’t really thought about it too much.” That was my considered opinion on two of the great Machiavellian villains of Shakespearean literature. I knew then that my chances of joining the elite in London had disappeared. The woman looked mildly disappointed, it was as if she’d set me up for an open goal and I fell over trying to kick the ball. All was lost. Even namedropping that my mother was a first cousin of the brilliant Irish playwright Brian Friel, as she had instructed me to do, didn’t get me out of jail. It was a close shave. I could’ve spent the rest of my life gazing into the abyss of my own academic arsehole in London. Instead, I ended up in the fleshy parts of the holy land. What dear reader you may think has this got to do with Eddie Van Halen?

Well during my visit I took a stroll to the Virgin megastore and spied there two Van Halen albums that you couldn’t get hold of back in Omagh. Women and Children First and Fair Warning. I arrived home full of glee more excited about my new listening material, fairly unconcerned about the blown opportunities in London. I consoled myself safe in the knowledge that the stern older lady often mentioned me at fancy cocktail parties in Bloomsbury or Highgate or wherever the academic class gather. “That Irish fellow… I wonder where he is now? I’m sure he could’ve been someone,” she probably mused wistfully.

Meanwhile back in Omagh I was seduced by the divebombing and tapping of EVH as he kicked off Fair Warning with Mean Street [https://youtu.be/U2R2KXNQR1M]. The album is probably Van Halen’s heaviest effort. The guitar playing is supreme, I Alex Van Halen’s drum sound was immense,  t combination the brown sound as they called.

Standout tracks are the aforementioned Mean Street, Hear About it Later (Isolated Guitar track: https://youtu.be/7Zy1D0uH1ys] and So This is Love, the drum intro on the latter a thing of beauty. Alex Van Halen is on tiptop form and alongside them Dave Lee Roth jackasses around on vocals, entertaining as usual. Dirty Movies is a funky enough outing, with a classic Roth interlude “Take it off, take it all off.” Funny, dunno if he’d get away with it now, or if he’d care! For me Unchained, is one of the classic EVH riffs, chopped guitar with staggered drum beat a bit like Bonham [https://youtu.be/Cn8APTMyKsg]. Sunday Afternoon in the Park is weird, something you’d play loudly on repeat to annoy the neighbours. Push Comes To Shove has a reggae like bass intro and a leery guitar line to go with a sleazy vocal from DLR.

When I heard from Brogy that Eddie Van Halen had died Fair Warning was the first album I stuck on [for some reason we used to refer to it as Fair Warning Fair Warning I don’t know why].

“…And someone said fair warning, Lord will strike that poor boy down”

If I could meet the lady professor in London now I would ask her for a comparison of Women and Children First and Fair Warning and see how that one goes down at a fancy Bloomsbury cocktail party or wherever. Eddie Van Halen, RIP. Ar dheis Dé go raibh a anam.